Hans Peter's Bible has been in the Pennypacker family for over 300 years, and is currently housed at Pennypacker Mills in Schwenksville, PA, which now belongs to Montgomery County.

Ella Aderman of Pennypacker Mills says this about it: "The title page is not original to the Bible, it is one of the many pages (actually about 2/3 of the bible) that SWP found from another like Bible and had combined with what was left of the original Bible when it was rebound. Our main concern is that family members understand that it is not available for general public inspection because of its fragile condition, especially when the older photographs show more than what can be seen now."

This most important of old photographs, which shows the major handwritten notations, comes from Pennypacker's THE SETTLEMENT OF GERMANTOWN and the Beginning of German Emigration to North America, William J Campbell, Philadelphia, 1899. I have scanned it directly from the book. Other copies making the rounds come from a publication of the Pennsylvania German Society and are not as clear. 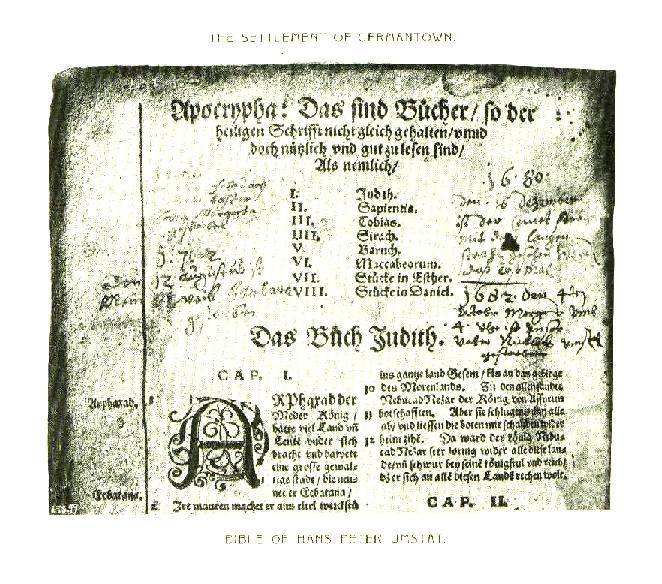 Governor Pennypacker was able to work with the original of this page over 100 years ago, and presumably it was clearer than the photo. The above are his transcripts of the notations. Archaic German words and spellings are often different than modern German and the handwriting, as you can see, it not easy to decipher. His transcripts seem to be for the most part correct or close enough. Nouns that would typically be capitalized in German are not always capitalized in the handwritten notations.

1680 den 16 Dezember ist der Comet stern mit den langen strahl gesehen worden dass erstinal (das erst[e] mal) - 1680 the 16th of December the comet star with the long ray/beam was seen the first time. Pennypacker translated the word Strahl as tail, which is not incorrect in concept, but literally means beam or ray. I read the last three words as das erst(e) mal, which means the first time and does seem to be what was written. It's also possible that later transcripts of what Pennypacker actually wrote were misread.

1682 den 4ten Oktober Morgens umb 4 uhr ist unser Vater Nicholas Umstat gestarben (gestorben) - 1682 the 4th of October about 4 o'clock in the morning, our father Nicholas Umstat died. Gestorben is the correct spelling and I don't see a strong reason to think the original shows an a instead of an o. This again may actually be a misreading of Pennypacker's handwriting.

Looking at this clearer photo from Pennypacker's book, I may change my mind about the wording on Nicholas's death being "um8" rather than "umb 4 Uhr," as I stated earlier in Nicholas Original Documents.

There are two possibilities:

The "4" may actually be a cross (look at the dots on either side of it). A cross is typically used in German records to show a death. This would explain what may be "um8," which should only have been "um" if Nicholas had died at 4 o'clock. On the other hand, they may have used umb for um way back then. However, there doesn't seem to be an obvious b in Nicholas Umstat's name as it's written.

In this better photograph though, it does look like much more like the word is umb than um8. Thinking about it further, I realize that we've been seeing Hans Peter's name as UMstatt and UMBstatt, um (or umb) meaning about or around. The absence of a cross symbol in the two other death notations may add to the likelihood that the word is actually umb, in which case Nicholas did die at 4 o'clock in the morning.

It's a tough call. Fortunately, the time of Nicholas's death is not as critical as the date itself. Unfortunately, it is impossible at this point to view the original handwritten notations due to the Bible's having been rebound too tightly in 1877. 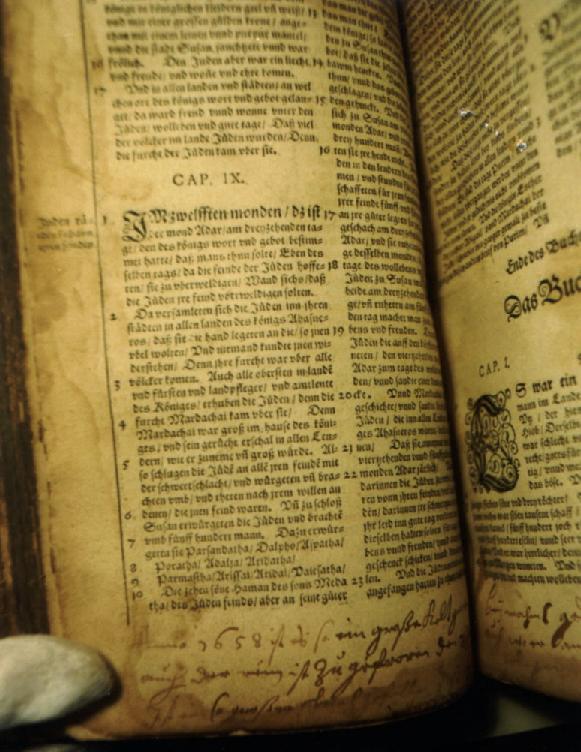 "Anne 1658 ist es so [ein] grosse Kalt gewesen dass auch der rein ist zugefroren den 31 Januarie ist ein so grosser schneh gefallen das es vier tag geschueien hatt bei mahns gedencken kein schneh so grosser ist. Auch wo er am diensten gelegen ist gelegen" (see page 51) - In the year 1658 the cold was so great that even the Rhine was frozen up. On the 31st of January so great a snow fell that it continued four days. There was no snow so great within the memory of man. Even where it was the lightest it lay ...

Photo courtesy of Betsy Umstattd. The "thing" at the bottom left is a gloved thumb holding the Bible open.

It appears that this notation continues on the following page, or it may be another one, I can't tell.

Following are additional notations for which I've not seen photographs. The source is a typed page headed "Umstadt Bible" from Pennypacker Mills, a section of which was apparently written by and dated Saml W Pennypacker, Dec 28th, 1878. The references after each of the following, based on the wording, are presumably page numbers from the Bible, but I'm not positive of that. More information from this page can be found in History of the Bible.

COMMENT - As it seems unlikely that Nicholas would have bothered writing this comment about the Palatinate (Pfalz) had he lived in Krefeld, I take this as a further reference to his whereabouts in 1667 - in the Palatinate, if not precisely in Kriegsheim, although Kriegsheim was part of the Palatinate. The above translation is not quite complete, I would translate it: "This is a peace text ... as it happened in the Pfalz in the year 1667 February 29.

COMMENT - it is extremely difficult to interpret these notations without being able to see the originals, but assuming that the word vorgezeignenete is correct, I would translate it as "previously shown," an adjective describing Spruch. Spruch in this case may be better translated as ruling. Thus, I would translate it: This previously shown ruling was Kaiser (Emporer) Ferdinand's last.

History and Pictures of the Bible

A Blurb from the "Daily Pottstown Ledger," 1875 and a MAJOR BREAKTHROUGH!!!

Back to Nicholas Original Docs

Back to Hans Peter Bibliography