History of Hans Peter's Bible
The Bible Itself

It's interesting to note that the most important of the handwritten family-related notations were made on the first page of the book of Judith. The book of Judith is part of the Apocrypha, which is not a part of today's Protestant Bible, particularly as used by the Lutheran church, but is found in Catholic Bibles. Early UMs were found in Evangelische (Lutheran) church records and so were unlikely to have been Catholics. So the question arises as to why the Apocrypha was included in Hans Peter's Bible. Here's the answer: The Reformation took place in the early 1530's. Luther's aim was to print as many Bibles in German as possible, as part of his "Spiritual Democracy," i.e. that everyone should be able to read and have his own German (not Latin!!!) Bible to read. Luther included the Apocryphal books, saying that they were "a good and useful piece to read, but not as good as the Bible." So up until about 1900, all Bibles printed in German included the Apocrypha.

Eleanor Mayfarth suggests that perhaps he wrote the messages in the margins of the book of Judith due to the tumult of the times in which he lived. The book is titled in today's Catholic Bible as "The Prayer of Judith." Judith was a widow who prayed that God would come forth and protect the Israelites from the enemies that were assailing them. Nicholas was born and grew up during the Thirty Years War (1618-1648), which wreaked havoc among the families of the Palatinate.

Please remember that the above is not necessarily or completely Hans Peter's original Bible, as it was restored using parts of a similar Bible (see below).

This Bible was given to James A Pennypacker by Margaret H Pennypacker (Mrs Samuel W Pennypacker, 2nd) on October 1, 1970. At this Dedication ceremony being held at Pennypacker's Mills on September 19th, 1981, I renounce all claim to this venerable Bible and place it in the possession of Montgomery County, Pennsylvania.

"This venerable volume apparently first came into the possession of my forefathers in the year 1652 and it has a history which is by no means uneventful and which from the notes upon its leaves and other sources of information can be traced with considerable accuracy.

"Printed at Heidelberg in 1568, sometime during the first century of its existence it belonged to Johannes Philippus Krill of Liltz who was probably a minister of the Gospel and who beside marking numerous texts made the references to a sermon upon affairs in the Palatinate and to the last words of the Emperor Ferdinand. He gave it to Matthias Wasselet (?) of Dorsten who in 1652 presented it to his brother-in-law Nicholas Umstat living at or near Crefeld on the Rhine. Umstat my ancestor in the eighth generation made the marginal references to the severe winter of 1658 when the Rhine was frozen across, and to the appearance of the great comet of 1680. He died at four o'clock on the morning of the fourth of October 1682 and it then became the property of his son Hans Peter Umstat who entered his family record at the beginning of the book of Judith.

"On the 16th of August 1685 Hans bought from Dirck Sipman of Crefeld two hundred acres of land in Pennsylvania and soon after set sail for America in the "Francis and Dorothy" taking with him his wife Barbara, his children John, Anna Margaretta, and Eve, and this Bible. He arrived at Philadelphia October 12, 1685 and settled in Germantown toward Plymouth where he spent the remainder of his days as a husbandman.

"Anna Margaretta died February 10, 1696, her mother Barbara died August 12, 1702 and Eve the oldest, perhaps the only, remaining daughter married about 1705 [1699] Heinrich Pannebäcker. She obtained the Bible and from her it descended in succeeding gemerations to Adolph, John, Adolph, and Samuel Pennypacker of the Trappe Pa the last of whom rescuing it from amid the rubbish of his garret gave it to me in 1872.

"In the course of three centuries it had lost nearly all of its illustrations and some of its leaves and had been once rebound doubtless at Germantown. Wishing to complete it I wrote to several Antiquaries in America and Europe directing them to secure for me another copy and was informed that no such edition of the Bible had ever been printed. However after a six years search Frederick Müller and Company of Amsterdam obtained a copy for me from a Monastery in 1878 and the book is now entire. The principal notes which have been made in it are as near as I can decipher them as follows ...:" [see main Bible page for the notations and transcripts/translations].

"Through two hundred and twenty six years nine generations of my folk have scanned the pages of this Bible. As I look at it now browned and seared it carries me back through centuries to the dim and shadowy past and calls up before me men long dead who are near to me because their blood courses through my veins and yet of whose existence but for it I should never have known. It tells me of a people crude and simple it may be but who loved what they believed to be the truth who were ready to be burned and beheaded rather than surrender their faith and who when they left the fatherland which with all its tender association had grown to be cruel and came to dwell under strange skies in a wilderness with the wolf and the savage brought with them their Bibles. It brings to me the sighs and doubts breathed over it by a husband and wife loath to abandon forever the old home and old friends and is laden with the dangers of a long voyage across the sea and with the trials and struggles of lives spent first in caves and then in log huts amid the desolation of the forest.

"From it peer the faces of children who long since have grown to maturity and died and been forgotten, broad and round and unkempt faces whose features are still akin to those that surround me now. I revere the book which almost seems to be a part of my own life for who can say that my impulses are not the results of impressions made long ago on the minds of those rude and sturdy husbandmen along the banks of the Rhine when in the evenings or on "den heiligen Sonnigtag" forgetting their cattle and their harvests they thumbed and soiled these old pages. The Bible recently rendered into their own familiar speech by Luther had come to them as a new revelation and it wrought into their souls broadly and deeply with a force which moulded as well their habits and their lives. The effects of such influences can never be eradicated.

The 1925 Fry material includes a sheet dated September 25, 1928, that shows "Quotations from the Family Bible of Hans Peter Umstat." It quotes briefly the material above, but shows its source as Bevan A Pennypacker (Son of Samuel W Pennypacker), as "Copied from the original entries by Meredith Hanna September 25, 1928 ... " It makes some sense to me that Bevan might have in fact written it, but I don't know.

I'm open to correction or, even better, the right information on this, it's really rather confusing.

Once again, please remember that Nicholas was of Kriegsheim, not of Crefeld, according to all evidence available as of now.

The following section is signed by Saml W Pennypacker, December 28th 1878, and seems to contain additional notations from the Bible, apparently transcribed by him prior to the rebinding. My (Cris's) translations or comments are in [ ]. I believe that the larger number references must be the page numbers from the original Bible upon which additional notations were made, because Habakkuk, for instance, has only three chapters and 56 verses altogether. Note that SWP's signature and date appear to head the section, not end the section above.

"2 Johannes Philippus Krill zie [zu] hohe Sieltz Anno Jesaia 2" [zu also means from in this context, and hohe means high. I'm guessing that Governor Pennypacker could not make out the year and so left a blank after Anno. Jesaia 2 is Isaiah 2]. (See IMPORTANT comments on A Blurb on the Bible from the "Daily Pottstown Ledger," 1875).

"4 The lines beginning 'Gott allein die Ehr und sonsten Keinen Mehr' Habacuc 93 were written by Hans Peter Umstat." [This means "To God alone the glory and none other." Habakkuk 93] 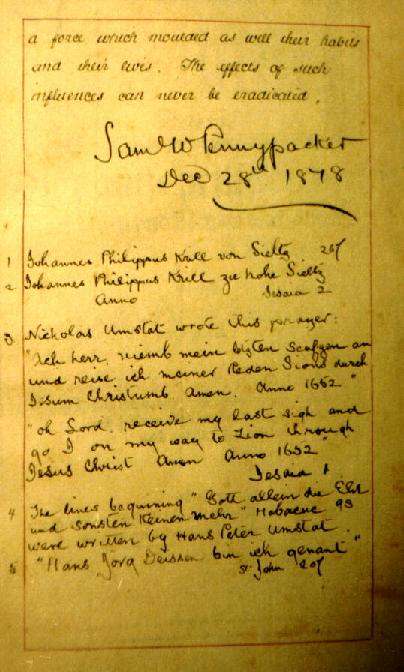 At the top of this page is the end of the section said to have been written by Mrs SWP. Note the different handwriting.

Note also that Hans Peter's prayer contains Latin words (Jesum Christum[b]) among the German. It's interesting that here too, assuming that SWP copied these notations correctly from the original notations in the Bible, the b is added to the end of Christum, which in Latin would not end in b. This adds further evidence that the word um was spelled umb, at least in the Kriegsheim area in the 1600's, and further explains the occasional spelling Umbstatt.

Additional handwritten notes, again in the handwriting of and signed by Goveror Pennypacker:

"Henry Melchior Muhlenberg in the Hallesche Nachrichten 1760 tells this story which well illustrates the hold the Bible had upon the common people in those days:

"A hundred and more years ago, through the gracious providence of God some Bibles were secured by the Protestants living in secret in Bohemia. A certain family received one of them and kept it hidden. The old father of the family at certain times invited his children, grandchildren, and near relatives to come together under the semblance of giving a feast. They sat together until late in the night and in order to prevent the clergy from thinking they were holding dangerous meetings, pipes and tobacco lay upon the table and beer and brandy stood in bottles around. These however received little attention. At midnight when all was still the old father went down into the cellar and put the Bible as a holy thing into his bosom. The whole family sat around the table and waited in eager quiet to see and hear the holy relic. The old father sat down in his place, drew out the Bible, kissed it with deepest reverence, pressed it to his heart and wept tears of joy, and in these tears all present united. Afterward the Bible was sent around from the oldest to the youngest of the relatives and each in turn pressed it to his heart with reverence. After this had been done, one who was able to read selected a verse or text and read it aloud two or three times so that all ate and drank of the Word of Life with great eagerness and were changed in spirit and living. Then they gave the Bible a farewell kiss, put it again in a safe place and, so strengthened, separated until they had an opportunity for a renewal of the feast, and thereafter showed the Christian strength and fruits of belief in a godly life and conduct." 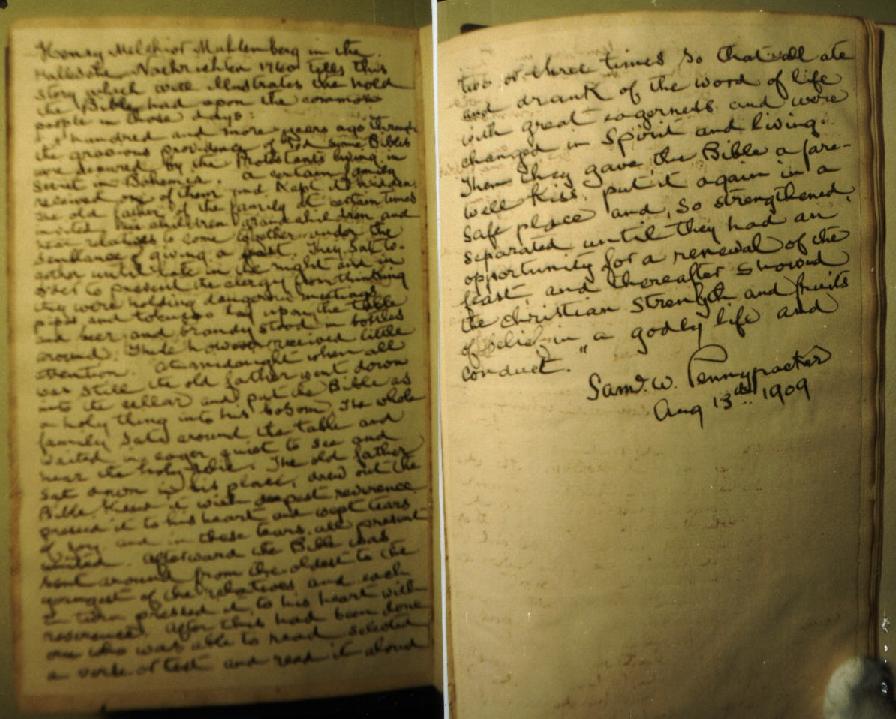 Nachrichten means news -Hallesche Nachrichten was presumably the name of a newspaper in or about Halle, Germany.

(1) This information, including notations and translations shown on the main Bible page came from a typed transcript "Umstadt Bible," which is available from Pennypacker Mills, 5 Haldeman Road, Schwenksville, PA 19473. It is used here with permission and is not to be reproduced for publication elsewhere without the express written permission of Pennypacker Mills.

All photos on this page courtesy of Betsy Umstattd. I've done some enhancing to better show detail. I've also made some minor corrections to the text, primarily of some German words, based on what I can read from these photographs. The photographs are also copyrighted and are not for publication elsewhere.

A Blurb on the Bible from the "Daily Pottstown Ledger," 1875 and a MAJOR BREAKTHROUGH!!!

Back to Hans Peter's Bible