Growing up, “Earle” and his older brother Roy didn't have much time for their sisters. Going to Sunday School they would always make Mildred and Jean walk behind them. And coming home, Earle would take his white collar and cuffs off - because he hated them.

The hardest whipping, Jean could remember him getting, was when Papa found evidence of a "smoker" (either pipe or cigarettes) under the steps of the side porch. [He would become a heavy smoker, of anything: cigarettes, cigars and pipes, until stopping completely when in his mid-40s.]

His mother got "real mad" when she was taking the children to see their maternal grandparents in Rogersville, Tennessee. One of the high-lights of the trip was eating their nice fried chicken lunch in a little summer-house at the junction where they changed trains for the short line which just went to Rogersville. As the train pulled out, Alice discovered Earle and Roy hadn't gotten off. She was frantic. With Clinton just a baby in her arms, Mildred and Jean crying (for as usual their eyes were full of cinders the result of hanging out the screenless windows). Finally - they noticed the train backing up and two little boys getting off. 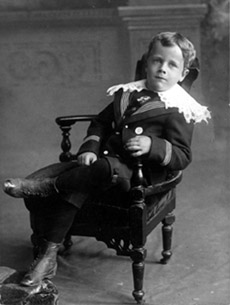 Some of their vacations were spent in Kentucky on their paternal grandparents' farm in the pretty blue-grass country. The children, from a small town, loved the animals - especially the horses. The big event in Ewing, Kentucky was the "Fair" - after much preparation of cooking and handiwork to display. Two of the Umstattd grandparents' daughters had adjoining farms, so the children had many cousins to play with

Earle loved music and learned to play the trombone quite well - and was a "bathroom singer". Roy had a clarinet; Mildred and Jean played the piano.

Earle liked the woods - just getting out and walking, riding, fishing, hunting and taking pictures which he developed himself. [He became an avid duck hunter and skit shooter.] Sometimes in the summer they would all go out to the river and rent a cottage. There was a large pavilion out over the water and in the evening they would have music and dance. Earle, a good dancer, taught his sisters to dance. He taught Jean to swim - NO LESSONS - just threw her off the float. His great love was reading. Jean thought he was wonderful because he could read so well and memorize anything so readily. When she was young, Jean thought Earle would be an actor.

Although she liked him, Earle detested one little neighbor, Eleanor Seneker. Every time Eleanor would come to see Jean/Earle, Earle would grab an old Spanish war sword and brandish it about and scare her away. Eleanor was fascinated by him, and would always slip back sooner or later.

Over the years, WEU never mentioned his Umstattd grandparents. In fact, he didn’t tell his wife about his trip to Ewing, Kentucky for his grandmother’s funeral. Therefore, after his death, all his family knew was what his sister, Jean, related, in 1988, about the train ride her siblings and parents took to visit Benjamin and Lizzie (Blair) Umstattd. The reason may have been that WEU’s mother, being proud of her Scottish and Revolutionary War heritage, wasn’t impressed by the farming family in Kentucky – with no known Revolutionary War ancestors.

In 1912, WEU graduated from high school. Five years later, he enlisted in the Army at the beginning of Wolrd War I. Showing leadership ability, he was put in charge of training officers in Allentown. Pennsylvania. Although he hadn’t gone to college, he was in charge of men from Princeton and other eastern Ivy League colleges – men with whom he remained friends for the rest of his life.

In 1919, “Earle” Umstattd moved to Canton, Ohio, when he became known as “Bill” and began his career at the Timken Roller Bearing Company. He served in various factory departments – as assistant foreman, assistant chief inspector, chief inspector, assistant superintendent of the Bearing Factory,

In 1924, when assistant factory manager, Umstattd married Doris Bowman of Canton, Ohio. The next year their first child William Bowman Umstattd was born.

In 1929, he became factory manager and his second child, James Mitchell Umstattd, was born.

By 1932, he was executive vice president until 1934 when he became president of the Timken Roller Bearing Company – to serve in that position for the next 25 years.

On the front page of the June 26th edition of the Canton Economist Felix Hinkle wrote, It’s Our Off-Stage Acts That Count. “...About five years ago when I was a complete stranger in Canton, my brother-in-law visited me over the week-end. Being an engineer, he expressed a desire to inspect the Timken plant. We called at the factory office on Saturday afternoon, and naturally found the plant shut down. Just as we were preparing to leave, a man approached to ask how he could serve us. We told him the purpose of our visit, and in the absence of a guide, this man agreed to escort us through. We later learned that he was the superintendent. Amost all of the afternoon was consumed in making this expedition, and our most gracious host left nothing undone to appease the curiosity of my guest. It was evident that no selfish motives could have prompted this unusual hospitality toward two absolute strangers. Neither of us was in a position to promote the welfare of this gentleman in any manner, and as far as I could determine, this sacrifice of time was merely the expression of a man who was genuinely courteous and throughly interested in his craftsmanship. I did not forget this experience or the name of our host. Consequently, the account of William Umstattd’s promotion was of more than passing interest to me. So again I say, if you would truly know a man, note his behaviour when he is off stage."

In 1936 William E. Umstattd was eleted president of The Timken Steel & Tube Company, a wholly-owned subsidiary of The Timken Roller Bearing Company. One Sunday when WEU had been out and returned home, he was asked where he had been. “At the plant, to learn who the next president would be.” When asked “Who?,” he replied, “No one.”

On December 29th, in 1947, Umstattd’s eldest son Billy, 22, died as the result 4 months of ill treatment in a Nazi prison camp following World War II’s Battle of the Bulge.

At the end of 1959, Bill Umstattd stepped down as president and became chairman of Timken’s Executive Committee – a position he held until his death..

Under his leadership, the company tripled in size, establishing new plants in the United States, Canada, Australia, South America, South Africa and several countries in Europe – increasing sales from $22 million to $262 million annually. Umstattd generally is credited with bringing the National Professional Football Hall of Fame to Canton.

In 1961, WEU was awarded the Chevalier of the Legion of Honor, one of the highest honors bestowed by the French Republic.

The Umstattd Performing Arts Hall at 2323 17th Street NW in Canton, Ohio, was named for him.