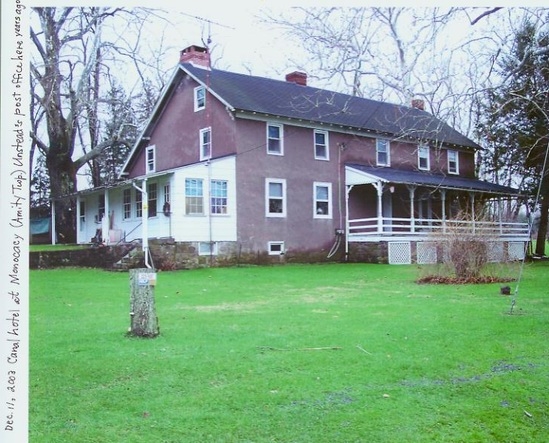 In December, 2003, Don Shaner received this information from the Historical Society of Berks County: It's been reported that in all probability the tiny Monocacy Station Post Office will close in a few months, following the retirement of the postmaster. Monocacy Station is a hamlet south of Route 422 (Philly Pike) and north of Route 724. The tiny post office that serves this area took the place of two earlier installations, all but walking distance from one another: Monocacy, originally located along 724 and earlier known as Manokesy and later as Unstead's, dated from 1833. Nearby, near the railroad right-of-way and originally in the old hotel building there, was Monocacy Station, which dated from 1872. Monocacy Station Post Office was removed from the hotel/general store building and today occupies "the tiny building."

George M. Meiser, IX, president of the Historical Society of Berks Co and official county historian, writes: "The Post Office designation was UMstead. I'm not sure how the "n" became substituted for the 'm,' but it surely IS Umstead. I've always admired the structure, in large measure to my knowing it was a canal hotel and store as well." He adds: "Umstead's, PA, was the official name of the post office. In 1894, all post offices in PA that had apostrophes in the title had the apostrope removed. Berks had a number of such places.....Shall's Store P.O., Mohn's Store P.O., Bern's, etc.

"Umstead's (meaning store and hotel) existed officially from January 29, 1856 to February 6, 1865. The postmaster listed in gov't records only states "H. Umstead." The "H" refers to Herman. The old inn/store pictured [in the above photo] was erected in 1833. The hamlet was originally called Mt. Airy, but when Herman applied for a post office, he discovered that PA already had another Mt. Airy so it was suggested the office carry his name. Accordingly, the office became Umstead's, which it remained until Herman lost his postmastership due to politics. It then became Monocacy."

A few years ago, Barbara Wentz found this in HISTORY OF BERKS COUNTY IN PENNSYLVANIA by Morton L. Montgomery, Philadelphia, Everts, Peck & Richards, 1886, p 1188 under "Unionville:" "Mt. Airy, or Monocacy, is near the west line of the township, on the canal and Schuylkill ... About 1833 Samuel Fox built a hotel in this locality, and became the postmaster. In 1837 he was succeeded by Herman Umstead, who kept a store and inn at the same time. In 1849 John Bland became the postmaster, who was succeeded by Umstead, who had the name of the office changed in 1856 to bear his name, as the Mount Airy title was claimed at another place. Some time about 1861 the name of the office was changed to its present title, Monocacy."

According to information gathered by various Umstead researchers, we know the following about Herman, although I don't necessarily guarantee it all to be completely accurate since I've not researched it myself. Documented corrections or additional information welcome.

Herman M Umstead was born March 18, 1802, in Pennsylvania. He appears at age 48 in the Union Twp, Berks Co 1850 Census. He died February 26, 1870, in Douglassville, Berks Co. He is buried at St Gabriel's Cemetery, Douglassville. His father was Jacob Umstead and his mother was Elizabeth (nee) Umstead, whose parents have not yet been determined. His first wife is said to have been Hannah? Unknown. They married about 1830 and she died shortly afterwards.

Herman's second wife was Elizabeth (nee) Umstead who was born March 14, 1812. They were married April 14, 1831. Elizabeth died February 3, 1832. She is shown as "Consort" in St Gabriel cemetery records, although I'm told that that does not necessarily mean they weren't married. Her father was John (Johannes) Umstead, Jr and her mother was Elizabeth (Bartholomew?) Unknown.

Update January, 2004: Lynn Marshall found this in "News-Bits" of Reading-Berks, "Our noting that the tiny Monocacy Post Office might close created a minor stir! It appears at this juncture that it will remain open, based on some assurances from a regional postal official. The present postmaster will retire this month; a replacement is being sought. A number of years ago, postal authorities planned to retire the facility but as the time neared, they relented."

Hooray for the unsung heroes who created the minor stir!!!!!!!!!