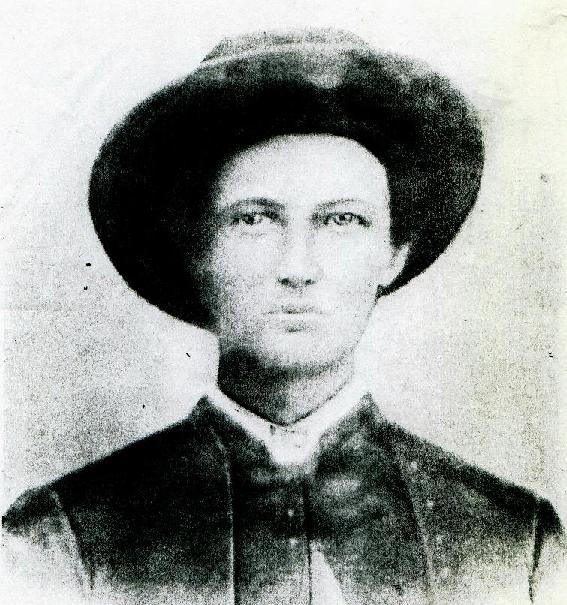 1863 - Richard's Volunteer Enlistment document showing his enlistment date as 5 Nov 1863 at Olney, Illinois, on which he claimns to be age eighteen, a farmer, born in Greene Co, Tennessee.

A descendant states: "We always heard that he was 15 (and that he) lied about his age."

1862-1865 - Muster rolls and related items dated November 1862 through August 1865, showing Richard present with a rank of private throughout. He had blue eyes, dark hair and a fair complexion, his height was 5 feet 8 inches. He enlisted November 5, 1863 in Company K, 48th Regiment Illinois Infantry, and was mustered in November 16, 1843 at Camp Yates in Illinois. His residence is shown as Hoosier (Twp), Clay County, Illinois. He was mustered out August 15, 1865 in Little Rock, Arkansas, receiving one Springfield rifle. His age is shown as eighteen on both muster-in and muster-out rolls. (The latter would apparently reflect his true age).

1879 - Declaration for Original Invalid Pension, 11 September 1879: "State of Illinois Clay County ... On this 11th day of September ... 1879 personally appeared before me, clerk of the County Court of record within and for the County and State aforesaid, Richard Umstead aged 31 years, a resident ... of the county of Clay, state of Illinois, who, being duly sworn according to law, declares that he is the identical Richard Umstead who was ENROLLED on the 5 day of November, 1863, in Company K of the 48 Regiment of Illinois Vol commanded by Capt. B. F. Reynolds and was honorably DISCHARGED at Little Rock, Arkansas on the 15 day of August, 1865; that his personal description is as follows: Age, 19 years; height 5 feet 10 inches; complexion fair; hair dark; eyes blue. That while a member of the organization aforesaid, in the service and in the line of his duty at (or neer?) Ross Ville, in the State of Georgia on or about the 7 day of July, 1864, he was injured by rupture or bursting of the veins inside of legs both above and below the knee. This occured while on a march from Sand Town to Ross Ville in the state of Georgia. That he ... never was treated in Hospital but was treated by J. P. Golden Assistant Regimental Surgeon. That he has not been employed in the military or naval service otherwise than as stated above .... That since leaving the service this applicant has resided in the County of Clay in the State of Illinois, and his occupation has been that of a Farmer. That prior to his entry into the service above named he was a man of good, sound, physical health, being when enrolled a Farmer. Now that he is so much disabled from obtaining his subsistence by manual labor by reason of his injuries, above described, received in the service of the United States; and he therefore makes this declaration for the purpose of being placed on the invalid pension roll of the United States... That he has never received or applied for a Pension. This his Post Office address is Jones(?) Ville county of Clay State of Illinois." Richard signs with an x as his mark.

1881 - War Department, Adjutant General's Office, the Commissioner of Pensions, Washington, D.C. 2 February, 1881 repeats previously shown information and that "The records of this office furnish no evidence of alleged disability." Spelling on this document is Umsted.

1883 - War Department, Adjutant General's Office, Washington, D.C., 6 February 1883 lists Richard Umsted's presence at various locations where his regiment was stationed and that regiment hospital records were not on file.

1889 - Emily Caroline Potts Umstead's "Declaration for Original Pension of a Widow, --- Child or Children under Sixteen Years of Age" dated 2 April 1889, Jasper Co, Illinois, stating ... "that she is the widow of Richard Umstead who enlisted" ... "in the war of 1861 to 1865, who in said service contracted vericose veins of both legs from the effects of which he died in said county on the 24th day of March, A.D. 1889 ... that she married under the name of Emily C Potts to said Richard Umsted on the 1st day of August, A.D. 1870, by W. S. Bishop M.G. at Bridgeport, Illinois ... [listing his legitimate children born between 1873 and 1887] "yet surviving who were under sixteen years of age at the father's death" ... that no prior application has been filed by her but her said husband was receiving(?) a pension for said disease on Cerfiticate #250606 ... that her residence is Newton ... Illinois.

1889 - Medical Evidence in the claim of Emily C. Umsted for Widow's Pension, 6 May 1889, State of Illinois, County of Jasper: "In the Pension Claim of Emily C Umsted widow of Richard Umsted Late of Co K 48th Ill(inois) Regiment ... Dr. H. S. Hinman a resident of Newton in the County of Jasper State of Illinois ..., who, being duly sworn, declares in relation to the aforesaid case as follows: I've been the family physician of Richard Umstead for the past 10 yrs. during which time I have repeatedly bandaged his legs being vericosed veins on them and I was also the physician during his last illness which resulted from bursting veins and blood pouring(?) from the same. The vericose veins were the direct cause of his death - which I often told him many times would end his life. He died on March 24, 1889 from the above named disease. I was also present at the birth of the following children: Martha E. born March 24th 1882 and also Florine May born June 5th 1885, both children are living at the present date May 6th 1889."

1926 - Application for Reimbursement (of physician and burial costs) filed in Sullivan County, Indiana by Lucy B Loudermilk, daughter of Emily C(aroline Potts) Umsted, showing Richard's widow Emily as a pensioner of the United States who died December 18th, 1925 of paralysis, at Shelburn, Indiana, and buried at Newton, Illinois.

Back to William UM and Margaret Etherton