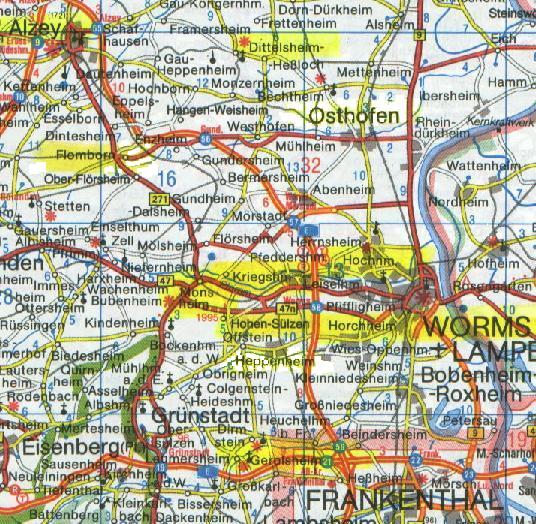 Although this is a modern map, it defines the area of the early UMs - not only of Nicholas and Hans-Peter pre-1685, but of the 1850s Gerolsheim UM immigrants and their connection to the Kriegsheim/Hohen-Sülzen UMs.

It is difficult to accurately demonstrate distances on a map that has been scanned and resized, particularly when the scale is in centimeters and distances are in kilometers, but roughly, as the crow flies, the distance between Kriegsheim and Flomborn is about 10km or 6 miles. So we can see that these areas were not terribly far apart.

Worms is on the Rhine River. The Rhine runs NORTH from Worms, then NORTHWEST, and so it is in this direction that Hans-Peter and family traveled down river to reach Rotterdam.

ALZEY (upper left corner, pronounced ALTZ-eye) - a marriage record has been found - 4 March 1757 Johannes Umstatt of Stephen of Sülzen (Hohen-Sülzen) married Catharina Bub of Johann Jacob of DITTELSHEIM (pronounced DITTLES-heim). No other records of early UMs actually living an ALZEY have turned up, but UMs have been found in DITTELSHEIM records.

HOCHHEIM (abbreviated Hochhm on the map and pronounced HOKE-hime) is a bit to the east of KRIEGSHEIM. This is where Hans Peter et al applied for the passport. There is also a Horchheim (pronounced HORK-hime) a bit below Hochheim, but original documents seem to indicate HOCHHEIM, not Horchheim.

Note the proximity of FLOMBORN to KRIEGSHEIM, a scant six miles or so. FLOMBORN is purportedly the birthplace of Hendrick Pannebecker who married Hans Peter's daughter Eve Umstatt. You can also see how Governor Samuel W Pennypacker would have passed through KRIEGSHEIM en route to FLOMBORN, albeit without benefit of the Autobahn.

A bit south of KRIEGSHEIM between Grünstadt and Frankenthal is GEROLSHEIM (pronounced with a hard g as in garage - GAIR-ols-hime). The GEROLSHEIM UMs have been connected back to KRIEGSHEIM/HOHEN-SÜLZEN.

Back to Schmal Docs

Back to Hans Peter's Passport