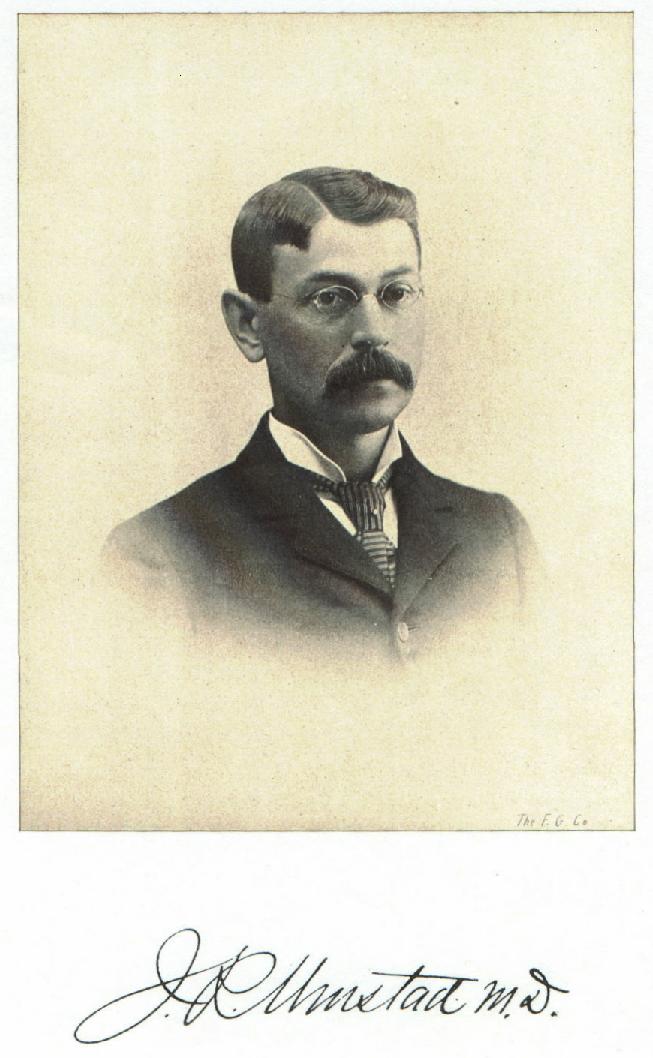 "J R Umstad, MD, a general practitioner of medicine and a specialist on diseases of the eye, is a son [of] Samuel and Lydia (Reiff) Umstad, and was born near Shannonville, Lower Providence township, Montgomery county, Pennsylvania, July 6, 1856. The Umstads are of Holland-Dutch descent, and have been resident of the county for several generations. Samuel Umstad was born and reared in Lower Providence township, where his life was passed as a farmer. He was born July 7, 1826, and died July 12, 1857, when in the early years of matured manhood. He was a Republican politically and a consistent member of the Dunkard or Reformed German Baptist Church, in whose faith he had been reared and taught. He wedded Lydia Reiff, whose father was George Reiff, of Norristown, Pa. To their union was born four children: Henry Alpha and Mary, who are deceased, and Dr. J R and Catharine, wife of Charles Jarrett, who are living.

"At twelve years of age Dr J R Umstad was taken from Lower Providence township to Norristown, where he grew to manhood. He received his education in the public schools of Norristown, and commenced the study of medicine with his uncle, Dr H[enry] U Umstad, of Black Rock, Montgomery county, Pa. After two years spent in office reading, he attended lectures at Jefferson Medical College from which he was graduated in the "Centennial Class" (1876). In a short time after graduation he opened an office for the practice of his profession at Kulpsville, where he remained for three years. He then purchased Dr Detwiler's office at Evansburg, and remained there ten years. At the end of that time in the spring of 1890, Dr Umstad removed to Norristown, where he has been engaged in active practice up to the present time. While having a large practice as a general practitioner, he makes a specialty of diseases of the eye, for which he prepared himself by taking a special post-graduate course on eye diseases in connection with other advanced clinical work at Philadelphia Polyclinic Hospital, in 1889.

"In politics, Mr Umstad has always been a Republican, and at the present time is a physician to the coroner, a position he has filled for over two years. He is also physician to the Norristown Charity Hospital.

"He is a member of the First Presbyterian church of Norristown; Economy Lodge No 397, Independent Order of Odd Fellows; Shannonville Castle No 211, Knights of the Golden Eagle; and Norris City Lodge No 11, Shield of Honor. He is practical, skillful and successful as a physician. Dr Umstad is a close student in the line of his profession. He is one of the special contributors to the Codex Medicus of Philadelphia, which is a high standard medical journal, containing select contributions from experienced physicians, concerning successful treatment of complicated and difficult cases arising in practice. Dr Umstad is president of the Montgomery County Medical Society, and has been for some time a member of the Pennsylvania State Medical society.