We refer to John, son of Johannes and Mary, as John "NS," ONLY as a way of distinguishing him from the many other Johns. There has been nothing found that would explain why he used "NS" as his mark. "NS" is NOT a part of his name.

In 2006 we received a copy of the inventory and will of Henry Reyner (no known kinship with the UMs, but a neighbor) from Jeanne Bedwell, a Reyner researcher. John "NS" signed as witness on several pages with his mark. Here's what it looks like, along with his mark from his own will, provided by Barbara Wentz. It appears to be simple printing, and does not resemble any of the old German script letters.

As in his Will 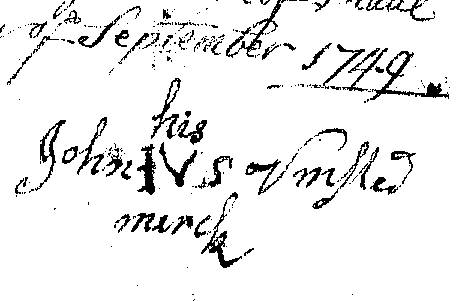 As in Reyner Inventory

26 Apr 1751 John "NS" bought 150 acres of land in Frederick Township, that he later willed to his son John in 1759. The land description clearly states that the land is in Frederick Township. The description in the will of John "NS," which shows the land as being in "uper Salford" Twp, is reasonably explainable. Frederick and Upper Salford Townships adjoin each other and are divided by the Perkiomen Creek. John's land bordered the Perkiomen Creek, and apparently was on both sides. Wit. Anthony Vanderslice and Nicholas Bunn. That same day Anthony and Nicholas affirmed the deed before Justice Owen Evans. Recorded 23 Nov 1763. (Philadelphia Co Deed Book H 18:448-450)

The original of the will of John "NS," written 8 Nov 1759 and signed with his mark as above, proved 5 Dec 1759, includes the following:
"ITEM - I bequeath unto my beloved wife Debora..."(furniture, household items etc) "...and it is my will & I do order that my wife shall have the maneging of my plantation where I now live on untill my son Herman arives to the age of Twenty two year."
"ITEM - I give unto my son John Umstad that plantation whereon he now lives on in Uper Sulford Township containing one hundred & fifty Acres of land be it more or less……" "...providing he paying out of it to my Executor the sum of eighty pounds lawful Money of Pennsylvania when my son Herman arived at age of Twenty two Years..."
"ITEM I give to my son Harman Umstad when he arived to Twenty two year that plantation where I now live on in Limerick Township containing two hundred & fifty Acres be it more or less ..."
"ITEM- It is my will & I do order that at the time when my son Herman is arived to Age of Twenty two year then my Execurs Shall put to sale all my personal estate...." "... and all of money arising out of my personal estate shall be divided in manner & form following, That is to say, my beloved wife Debora shall have first of all Eighty pound Current money of Pennsylva. out of the same for her maintenance and the Residue to be Divided in four Equal shares to my daughters that is Mary Vandershlise, & Debora Koplin, & Susanna Waggener, & Elizabeth Umstad....""I do hereby make & ordain my only & Sole Executors of this my last will and testament my beloved wife Debora & Jacob Umstad"

The will was signed in the presence of the Subscribers Nicholas Bunn, John Custer, John Koplin. (Original will; Philadelphia Co Will File 1759 #226, as copied by Barbara Wentz, also recorded Philadelphia Will Book L:355 )

THE FAMILY OF JOHN “NS” AND DEBORA

This document comes from the UM research team and was compiled by Eleanor Mayfarth.