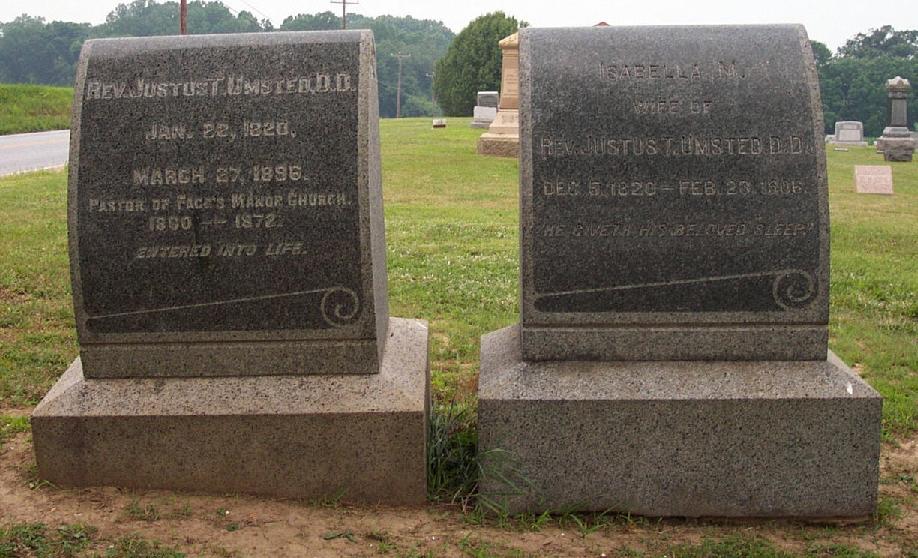 The following article written on notepaper was also found at the Chester County Historical Society by Don Shaner. Don doesn't know how old it is, but it gives a synopsis of the Rev Justus Umstead's life. 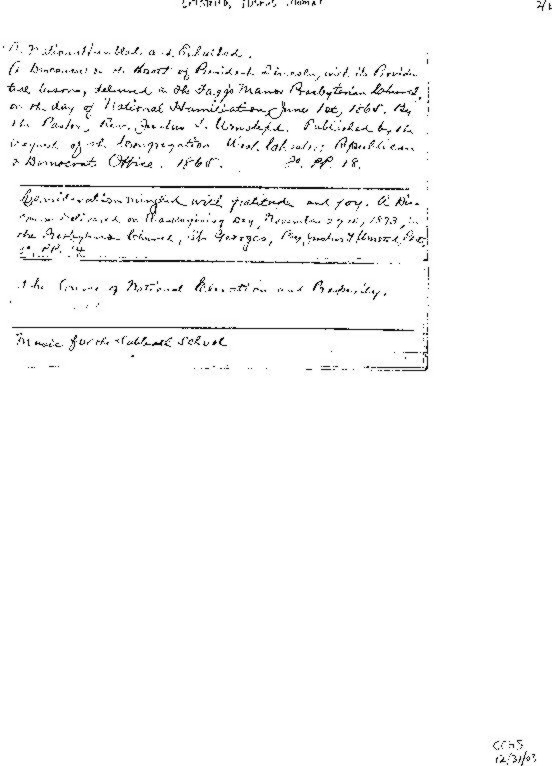 J.T. Umsted was born in Brandywine twp., Chester Co., Pa. He is the son of John and Catahrine (Harner) Umsted. He pursued his classical studies at the University of Pennsylvania and studied theology at the Princeton Seminary N.J. His first field of ministerial labor was at South Bend, Indiana, 1848-49. He then filled the following positions as Pastor: Muscatine, Iowa, 1850-53; Keokuk, Ia., 1853-58; S.S. Selma, Ala., 1859; Faggs Manor Presbyterian Church 1860-72; St. Georges Del., 1872-76; Smyrna, Del., 1877-87; White Haven, PA, 1887-92, when he retired from the active and pastoral duties of the ministry, but still preached as opportunity offered. He returned to Chester county in 1893 and resides in Coatesville, Pa. until his death. His remains were interred at Fagg's Manor Cemetery. Rev. Umsted married Isabella M. Wilson who with three children survived. In addition to the pamphlets here named, he has been the author of several poems religious, secular and humorous, which have been published in the local papers, and was for many years correspondent of the Philada. Presbyterian and the Baltimore Presbyterian.

The Duty of Obedience to Existing Powers and Laws in Civic Government. A Discourse Delivered in the First Presbyterian Church, Muscatine, Iowa, December 29, 1850; by Justus T. Umsted, Pastor of the Church
Muscatine: (ad. one line) 1851 80 pp 26.

A Plea for the Priority of Domestic Missions; A Discourse Delivered before the Synod of Iowa, in Burlington, Oct. 12, 1856. By Justus T. Umsted, Pastor of the Westminster Church, Keokuk, Iowa.
Keokuk: (ad. one line) 1856 80 pp. 28

A Nation Humbled and Exhalted.
A Discourse on the death of President Lincoln, with its Providential lessons, delivered in the Fagg's Manor Presbyterian Church, on the day of National Humiliation, June 1st, 1865. By the Pastor, Rev. Justus T. Umstead. Published by the Request of the Congregation. West Chester: Republican & Democrat Office. 1865 80. pp. 18.

The Source of National Elevation and Prosperity.

Music for the Sabbatical School

All the above used with permission.

Back to Burial Sites PA-WV