More on Hans Peter's Germantown Land
This is the text of a typewritten list that appears to have come from the Historical Society of Pennsylvania.
Submitted by April Taylor Demers.
LAND HOLDINGS OF THE UMSTATT FAMILY IN GERMANTOWN TOWNSHIP

Town and Side Lots toward Bristol (East side of Germantown Ave)

Section A, Containing 50 Acres (total)
1697 12(?) Aug.
Deed: Engel Milan, Matthias Milan, and Margaret Milan, heirs of John (or Hans) Milan, decd., to Joannes Umsted, for 50 A. in the town and side lands toward Bristol.
Recited in

Section B, Part 1, Containing 25 Acres (total)
1694 5 Oct.
Deed: Henry Sellen to Hans Peter Umsted, for 25 A. in the town and side lands toward Bristol.
Recited in above.

1694 7 Nov.
Deed: Hans Peter Umsted to Joanees Umsted, his son, for the same.
Acknowledged in Open Court held at Germantown on the 21st day of the 1st month (March) 1703/4.
Recited in above.

Section B, Part 2, Containing 25 Acres (total)
1694 9 May
Deed: Henry Sellen to Joannes Umsted, for 25 A. in the town and side lots toward Bristol.
Acknowledged in Open Court held at Germantown on the 21st day of the 1st month (March) 1703/4.
Recited in above.

Town and Side Lots toward Schuylkill (West side of Germantown Ave.)

Section A, Containing 25 Acres (total)
1689 7 Dec.
Deed: Herman Isaacs op den Graeff, attorney of Dirck Sypman, to Hans Peter Umstett, for 25 A. in the town and side lands toward Schuylkill, subject to quit rent.
Acknowledged in Open Court held at Germantown 18 October 1692.
Recited in "Synopsis of Title" in Deed Book I, No. 11, page 67&c. (original deed is in the Archives of the Germantown Historical Society). 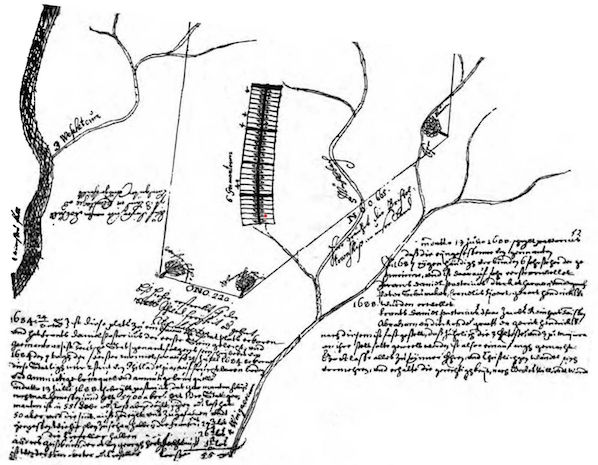 This 1688 map comes from Pennypacker, Samuel W. (1899) "The Settlement of Germantown and the Beginning of the German Emigration to North America" Philadelphia, William Campbell. Public Domain. 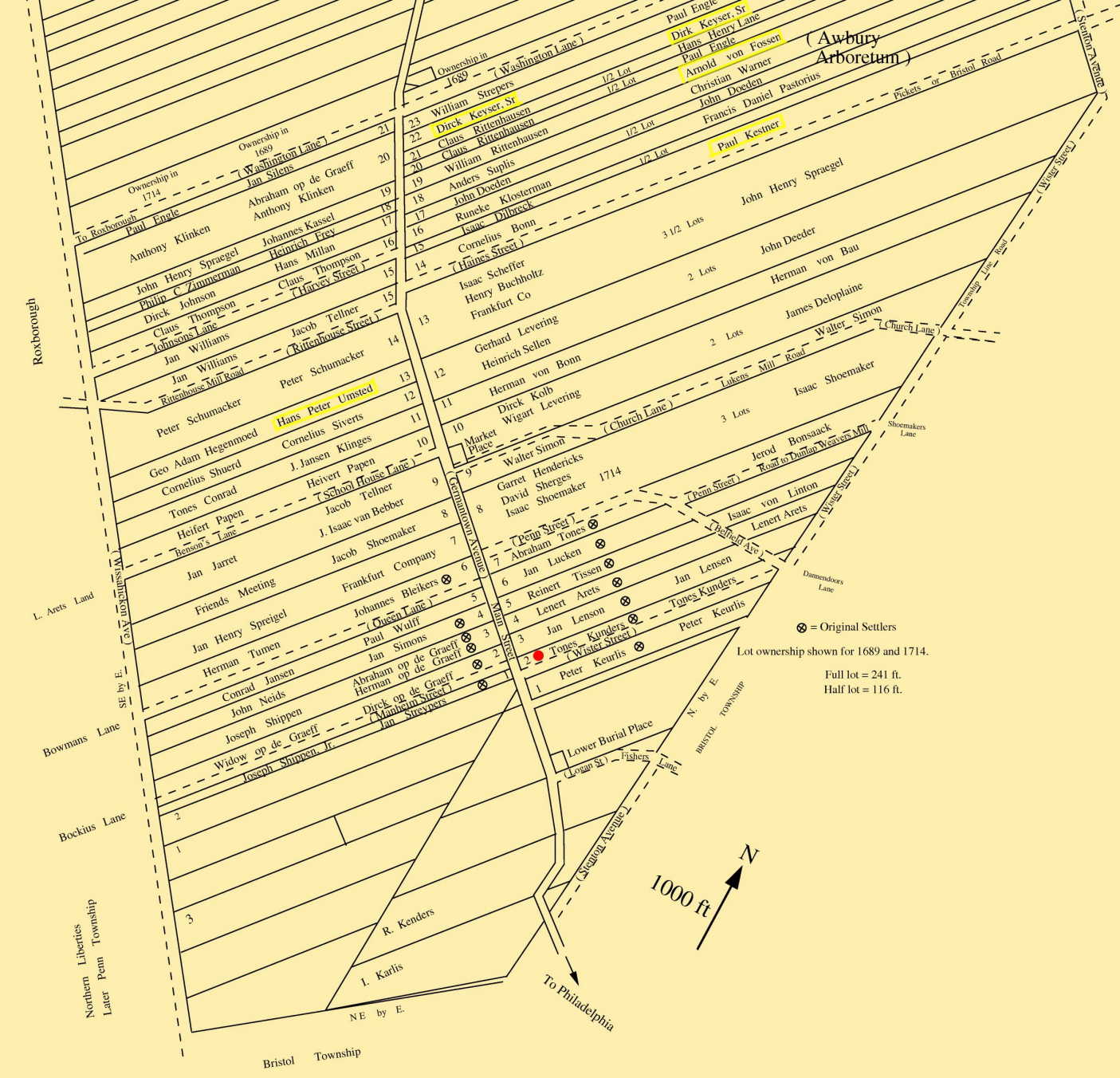 According to the above, Hans Peter Umsted’s Lot 13 was sold to Geo Adam Hegenmoed prior to 1714. Lot 13 is apparently that which he acquired by lot in 1689, 100 acres in the area known as Krissheim, adjoining Germantown. See more info in Hans Peter's Germantown Deeds.

It took me a while to figure out what this is. It was found at the Germantown Historical Society and is presumably (part of) a handwritten listing of the lot owners shown on the map (in reverse order), on the same side of Germantown Ave/Main St as HPU. The handwriting might indicate that this list is old. "Quaker Meeting" on the list refers to the "Friends Meeting" on Lot 8 on the map. Jacob Shoemaker owned that lot in 1689 and it was owned by the Quakers by 1714. Frankfort is misspelled as Frankford and only means they owned a lot.

HPU’s living near all these Quakers does not necessarily prove that he himself was a Quaker. It remains a question as to whether he came to Germantown to escape persecution or whether he just wanted to join his buddies here. Clearly, though, the Quakers we meeting from the beginning.

"Even in the early winter of their first struggling year, Philadelphia Quarterly Meeting (PQM) formally recognized Germantown Meeting, which met in the home of Thones Kunders (on lot #2 East). They continued to meet there, or at Jacob Telner’s house (#9 West) (and perhaps other houses as well) until 1686, when adult membership in Germantown Meeting can be computed to be at least 58, still mostly from Crefeld (1686 is about the last year in which I can confidently estimate meeting size, since from this point on too many immigrants are not known as to their religious affiliation). Too numerous now to meet in homes, they built a log-cabin meeting house on one of Abraham op den Graeff’s lots, #8 West. Abraham was one of the richest of the settlers; he owned several lots and was one of the very few who could afford to make a lot available in this way. He subsequently sold this plot, complete with meetinghouse, to Jacob Shoemaker in 1689; Shoemaker sold it to Heivert Papen in 1693, and Papen sold it to Friends in 1705 on which to build their new larger stone meeting house (and yes, we are still here on lot #8 West, three meeting houses and 332 years later). I presume that Op den Graeff, Shoemaker and Papen all intended that, in the end, this plot would become Meeting property.” [http://gmm.gfsnet.org/wordpress/?page_id=4183]

Back to Germantown Deeds

Back to Johannes Main