A Blurb on the Bible and a MAJOR BREAKTHROUGH!!!

"Mr. G. H. Pennypacker, of this place, has recently examined an old Bible which was published at Heidelberg, Germany, in 1568 and belonged to the grandfather of his great-great-great-grandmother. Its history is as follows : - Johannes Phillippus Krill, a minister, gave it to Mathias Wohlvelet, and he, in 1652, presented it to Nicolas Umpstadt, his brother-in-law, who lived near Crefelt, on the Rhine. It contains notes made by Nicolas, concerning the severe winter of 1658, when the Rhine was frozen up and the snow was deeper than was ever known; also of the great comet of 1680. There are many other marginal references. After the death of Nicolas, his son Hans Peter, (who was the ancestor of the Umstead family in this country,) brought it with him across the Atlantic, landing at Philadelphia, October 12, 1685. His daughter Eva was married to Heinrich Pannebaker, since which time this book, which is now 307 years old, has been in possession of the descendants of the latter family, and is at this time the property of Samuel W. Pennypacker, Esq., of Philadelphia." 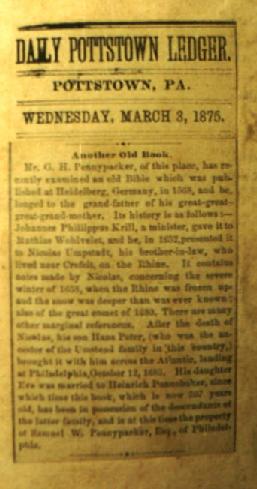 Information from the notes written by Mrs SWP (see History of the Bible) state: "Printed at Heidelberg in 1568, sometime during the first century of its existence it belonged to Johannes Philippus Krill of Liltz ... He gave it to Matthias Wasselet (?) of Dorsten who in 1652 presented it to his brother-in-law Nicholas Umstat ..."

I went looking for Liltz and Sieltz in my modern European atlas. I couldn't find either. So I got to thinking that the name of the town was probably very difficult to make out on the original, and that neither Liltz or Sieltz was probably correct. And then it hit me. I can't prove it without seeing the original notation, which I'm told is impossible at this point, but I just bet it's HOHEN-SüLZEN!!!! Since they didn't capitalize everything they should have in those days, it was easy to miss the "hohe" as being part of the name of the town, and the word "hohe" doesn't appear anywhere but in the one item above. Just as the zu was read as zie, the ü in Hohen-Sülzen was probably read as ie. Germans typically shorten or abbreviate town names, so the absence of an en on the end of Sieltz is not a problem - they probably even said Sülz or Hohe-Sülz. Ironically, Sültz(en) as pronounced in German sounds pretty much like Sieltz(en). When SWP was trying to decipher the notations, he wasn't thinking about the Kriegsheim area and probably didn't even know Hohen-Sülzen existed. Hohen-Sülzen is right there next to Monsheim/Kriegsheim and THERE ARE (LATER) UMs BURIED IN THE CEMETERY THERE!!!

The fact that Hans Peter purchased land from Sipman (who was OF Crefelt/Krefeld) does not prove Hans Peter's birth or residency in Krefeld. We know from other firm sources that Nicholas and Hans Peter were OF Kriegsheim. It is interesting that the Bible was presented to Nicholas in 1652. The earliest record we previously had of Nicholas in Kriegsheim is 1661, but if I am correct about Hohen-Sülzen, it places Nicholas there, or at least in the area, in 1652.

Records of later Krills (1709+) have been found in the towns of Biblis and Bürstadt, which are across the Rhine near Worms, only about 20km/12m from Kriegsheim. This at least establishes the Krill family in the area.

Dorsten is a bit north of Krefeld. There is a Darstein about 100km/60m south of Kriegsheim, as the crow flies. Again, I wish I could see the original notation from the Bible. This remains an open question, but in light of the discovery above, I'm inclined to think that there is a town near Kriegsheim the name of which may have been misread as Darsten. There is an Offstein, for example, right by Hohen-Sülzen, which isn't really too much of a stretch if the D is actually an O, but without being able to view the original notation, we may never know.

Note the spelling WOHLVELET, which is shown elsewhere as WASSELET. There have been no records found in Kriegsheim or Krefeld under either spelling to my knowledge, although I'm not sure an exhaustive search has ever been done on this question in either place. I have looked through LDS films from Dorsten, and didn't find either name there, or any UMs. There has been allusion to Wasselet being a French name. Wohlvelet, at least the "Wohl" beginning would seem more likely to be a German name. I suspect that it will ultimately turn out that the name is Was(s)eler or something like that. I wish I could view the original handwritten notation to see what it really looks like!!! This needs more work for sure.

Note also the spellings of Nicolas, Umpstadt, and Pannebaker in the "Daily Pottstown Ledger," but with this being a newspaper article, we can't really use these spellings to make any significant observations.

The Bible, by virtue of its being passed down to Eve, daugher of Hans Peter, and being retained by the Pennypacker family, along with connecting records in the U.S., DOES prove that Nicholas and Hans Peter are our ancestors. As SWP said, "As I look at it now browned and seared it carries me back through centuries to the dim and shadowy past and calls up before me men long dead who are near to me because their blood courses through my veins and yet of whose existence but for it I should never have known."

Back to Bible History

Back to Nicholas Original Records